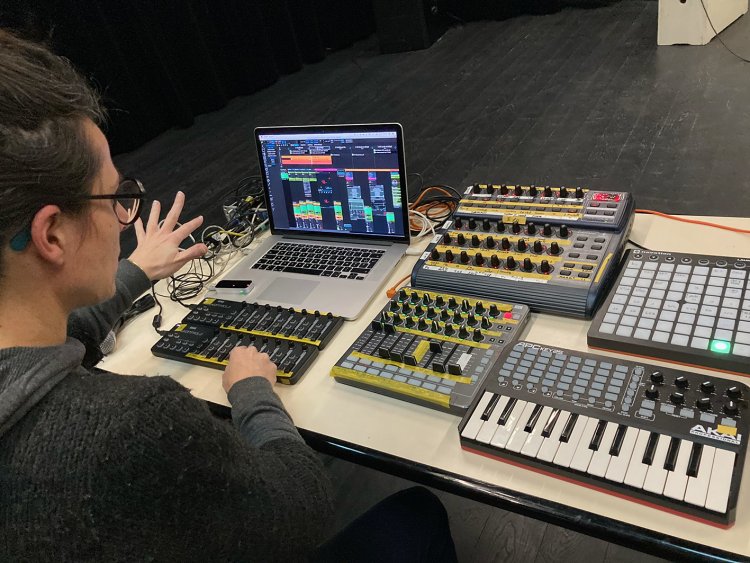 Presentation of the project

On a proposal by Gwennaëlle attached to the vibratory dimension that governs the living and inspired by Les Furtifs by Alain Damasio, the duo proposes a dialogue between environments of sensations and emergences. The two musicians gravitate around the axis of improvisation / composition in real time. The research takes as its starting point the "fleeting" alteration of the function of sound materials, which pass lawlessly from landscape to object, from horizon to place, from persistence to punctuality. Everything escapes, and everything is there, at once. This balance, whose primordial quality is instability, derives not only from the instrumental device, but also from the posture of the musicians. The primary nature of sound is permanently questioned here. From acoustics to electronics via effects, the manipulation of acoustic objects or the reworking of the sound of the guitar and its processing by Gwennaëlle, the erratic manipulation of effects by Jean-Sébastien generates a meeting zone where each affirmation of one position can only reveal another. Between fugue and flight, the musicians echo each other, conceal, transform, bounce back. The duo brings into play the metamorphosis of the subject by playing on the memory of the listener. Sound objects are proposed, they are identifiable. Subsequently they reappear in a transformed way, they are still recognizable but they have changed form, they have eventually gone from guitar to electronics and vice versa. This gives rise to a global object which is still made up of the same sub-objects but whose form has evolved. The duo seeks to develop in their work the composition of sound objects that are made, unmade, transformed by the combination of lines of research that constitute as many ways of dealing with the subject of furtive people. The piece is seen as an epic, a succession of paintings or states. the spatialization of sound internally to the composition. Stealths are movement, displacement, mask effect. The dimension of space is fundamental and intrinsic to the subject.

Gwennaëlle Roulleau is a composer, electroacoustic improviser and sound artist. Listening to the landscape or the sound body, she captures and sculpts the sound material in its physicality, transforms it to release substance, energy, emotion. She processes sounds into living organisms, always open to the risk of accident and pleasure. In an affection for the acoustic nature, she claims the electronic dimension of her instrument. Like so many subjective filters, the processing digs into and extrapolates reality, the synthesis considers other layers. His work explores the vibratory fields, audible or imperceptible by our senses, electromagnetic. She plays with improvising musicians, ventures into live performance, and creates devices that question the sound phenomenon, between real-time composition and writing, between the instrumental gesture and the device. His musical projects are presented in creative music networks, in theaters or on sites to be named.

Jean-Sebastien Marriage Guitarist improviser and composer since 1990, Jean-Sébastien Mariage develops new techniques and materials that make his instrument evolve, transcend it, open it up to sounds unexpected, to unsuspected music. He performs solo and in many free improvisation formations on the stage. international (Hubbub, ONCEIM, etc.). He is also an interpreter of contemporary composers (Elianne Radigue, Rhys Chatham, Eric Abecassis, Frederick Galiay...). He works regularly with dance, poetry, theater... (Carole Armitage, Michel Gendarme, Hop-la We Live company...). Recently, he directs his research towards the idea of ​​the "common place", including in his music referenced objects (patterns, sounds) which he proposes as so many pivots which subliminally arouse the common memory in order to dig new articulations. sound. Attaching particular importance to transmission, he has been a regular speaker since 2015 at the Philharmonie de Paris for various workshops.