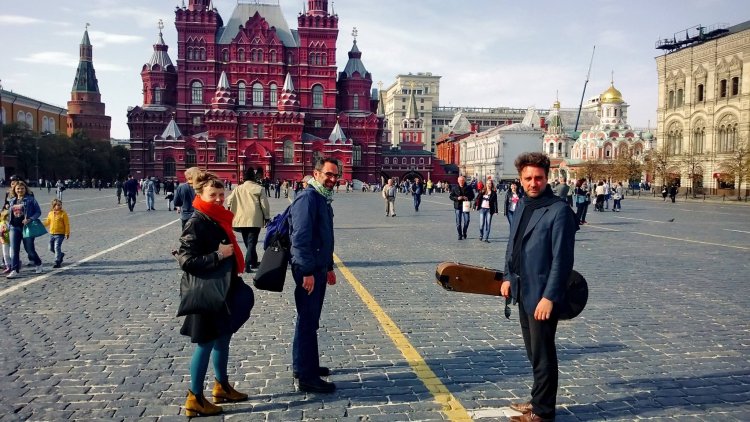 Three musicians meet around a book by Marguerite Duras. Three characters, invented, inspire music, pulsation, harmony ... through their silhouettes, their relationships, their movements, the space in which they find themselves, between the sea, them, and an idea of civilization.

A triangular partition which is formed, deformed and reformed, according to the tides. Music that announces the wandering of souls who are waiting to become.

Lines, dots, strata, melodies and hidden words, shown impacts, certainly acoustic, as if to better meet in the simplest way: playing / being together.

This original trio will not fail to amaze us with its sound fluidity, its sentimental and human generosity, its amorous conviction. Voice, clarinet and guitar are they not the dreamed instruments to take us towards these dreams? Alliance of organic, woody, metallic materials ... Can sound do this? We will see it together.

Three improvisers pay homage to Marguerite Duras’s novel, L’amour. A presentation of the novel can be found on the author’s website.

An invitation to read it again or to get it for yourself.

But here, it is only a question of short extracts set in the music of the trio. No need therefore to look for a narrative thread, itself exploded in the book. The choice of these extracts is also part of the musical project by projecting strange moments where each of the characters is as posed there, without interiority, without past or becoming, a suspended moment.

The diction of Catherine Jauniaux contributes to this "objectification" of the protagonists, of the dog, of the beach, a sort of echo to certain paintings by Giorgio De Chirico (to each his own ghosts). The dreaminess is there, powerfully projected by the singer’s voice. We are then seized when this voice changes register, leaves the words and goes to search the vocal cords at the risk of breaking them. Growls, breaths, chirps, crackles, squeaks, trills, babbling, a whole range of vibrations that come to mingle with the surprising creations of the other two protagonists, sometimes melting into an unpredictable alchemy.

Xavier Charles’ clarinet participates in this motionless cinematography, in these suspended times by rehearsals, by almost drones of notes held in moving textures, mixed with breaths, by bursts of micro-percussions, by a very extensive vocabulary put at the service of this scenography, of those moments when our sensibility rocks, capsizes.

A string that vibrates for a long time to initiate and punctuate the beginning of the album. Jean-Sébastien Mariage immediately announces his point, to resonate with extracts from the novel, with the "objectification" bias, where the lack of affect of the characters arouses our sensitivity. The guitar is in demand outside of any academic use, sometimes inviting electronics to the borders of cymbal caresses or softly metallic voices. It’s about extracting from the guitar, distilling delicate emotional essences.

Note that the inks on the cover are by Catherine Jauniaux, definitely everywhere. Many talents are gathered for this delicate moment with multiple flavors: the three musicians, the novelist, those who made things possible… and your imagination. The magic is only there with you, only with your listening. You must deserve this music, these words, these images. There are those moments of intense pleasure that some know how to offer you, in particular this trio.

Starting with a book by an influential writer - in this instance, Marguerite Duras - to identify useful improvisational cues is a tricky undertaking. The dangers are clear, the greatest of which being the propensity for intellectualization that should never even remotely appear in a situation of creative immediacy. Then, one takes a look at the names involved (Catherine Jauniaux on voice plus objects, Jean-Sébastian Mariage on guitar, Xavier Charles on clarinet) and the disc is approached with a lightened heart, well aware that we won’t be cheated.

Starting with a book by an influential writer — in this instance, Marguerite Duras — to identify useful improvisational cues is a tricky undertaking. The dangers are clear, the greatest of which being the propensity for intellectualization that should never even remotely appear in a situation of creative immediacy. Then, one takes a look at the names involved (Catherine Jauniaux on voice plus objects, Jean-Sébastian Mariage on guitar, Xavier Charles on clarinet) and the disc is approached with a lightened heart, well aware that we won’t be cheated.

Jauniaux switches between intense recitative and striking displays of her vocal equipment. She often blends with the instruments in unexpected ways, producing a wealth of unadulterated guttural timbres. A controlled virtuosity, at the same time modest and incisive, finely delineating the emotional spectrum of the Belgian artist. Mariage favors the use of guitar as a source of pan-tonal color, always poised for the most suitable indication for the context, whether it be in the form of jangling glissando backgrounds, sparse clean touches, throbbing drones, or subtle noises. Charles confirms his knack for selecting intuitive principles applicable to the collective jargon, somehow foreseeing the course of a spontaneous counterpoint while seasoning the whole with sharp overtones, tension-laden murmurs and chirping splinters of pure genius.

At first you may struggle a tiny bit to fathom the mechanics and developments of the music presented in L’Amour. There will be no difficulty in relishing it unconditionally once everything is deciphered. This is an articulate statement — imbued with somewhat pained humanity — that will be better understood by those who grieve for the absence of a much-loved person. Among the eleven tracks on the program, there are definitely highlights: personally speaking, both "Nuit" and "L’Aurore Extérieure" elicit goosebumps. But the fundamental coherence that permeates the interaction is to be admired at every step. Ultimately, the trio’s ability to turn the force of silence into arrows hitting the listener’s innermost targets is perhaps the outstanding attribute of this work.

L’amour begins softly, with lone and softly layered tones, decays, ringing, and other noises. It builds in intensity, still quietly. The extended tones fluctuate and stretch. A hiss comes into the left ear, coy squeaks into the center and a bowed(?) guitar persists in the right. The track shimmers and crackles. It heaves at points, before crumbling into a few phrases of carefully articulated French, then ceases. Each of the eleven tracks on L’amour follows a different course, but the basic contours and certain elements – the hushed guitar of Jean-Sébastien Mariage, the extended clarinet of Xavier Charles, and the dynamics between the lyrics, all in French, and the experimental vocalizations of Catherine Jauniaux – bind them, as does the text that inspired this project. I do not know French, so the lyrics, all excerpts from Marguerite Duras’ 1971 cinematic novel L’amour, are lost on me. Catherina Jauniaux’s powerful delivery, however, is not. Indeed, I might even hear more of the inflections, the drags and stops, and the sonority than I would were the lyrics in a language I understood. This album, moreover, was recorded after the trio toured Moscow, Berlin, Saint Petersburg, and Paris, reconnecting these major cities in which French once dominated as a literal lingua franca potentially to audiences who, like me, were able to bask in the vocals as estranged and beautiful sound. I am not sure how far the point about reasserting French as a regional language of culture should be taken, but, if not the language itself, Jauniaux, Charles, and Mariage are certainly elevating the French experimental scene in some of the experimental hubs of Europe, and without watering it down with Anglicism. The musicians of L’amour form an unconventional trio based on what seems to be an unconventional text. At times, its quiet dynamics remind me of some of the more variegated releases of Creative Sources and Insub. (In fact, it sounds to me like a more developed take on a spoken word, gurgly improv style that the Guez Trio, released years ago by Insub’s predecessor netlabel, had experimented with.) That, of course, is not to detract from its distinctiveness. Indeed, although I recognize a lot of the elements on L’amour, I have not heard them combined and staged quite like this. If you know French, I imagine there are layers of meaning accessible to you that I simply cannot speak to. And if you do not, it is certainly enough to let the sounds speak for themselves.