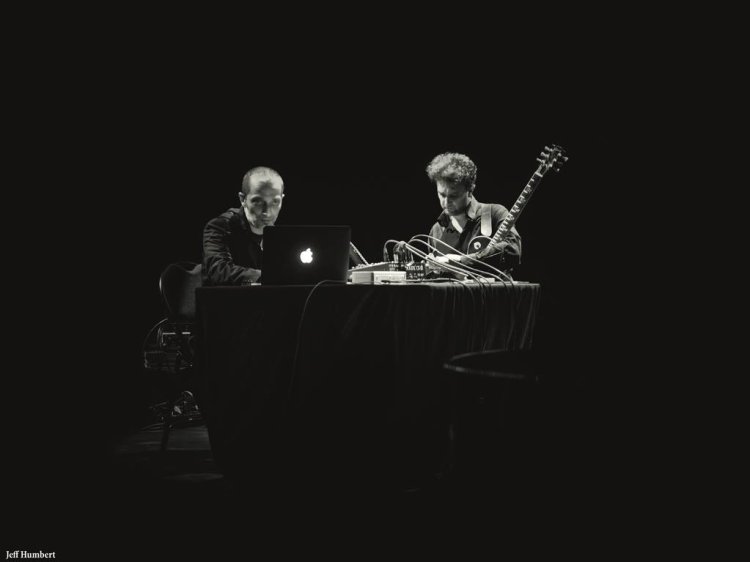 This piece was recorded at the GRM in June 2021, it is being mixed.

Statement of intent : MORPHÈME # 1 is a piece by Frederick Galiay for electric guitar and electroacoustic diffusion, performed by Jean-Sébastien Mariage.

The composition is envisioned as an excessive zoom of a hyper-slowed transient: a microscopic dive into the tiny space that separates the plectrum attack on the guitar string, from the resonance of the latter, while widening this lapse of time. to extract the spectral components.

The piece is a continuum of three parts, themselves divided into four sub-parts. The very slow progression, the rare and rather distant events lead the listener to question the relationship between space and the spectrum: an immersive installation that plays on the listener’s memory.

An acousmonium-type spatialization system broadcasts the electroacoustic tape. The speakers are distributed in the space in the most discreet way possible, the sound volume of the tape is long subliminal, in order to enhance as much as possible, both effectively and perceptually, the acoustics of the place. The guitar comes to inhabit the device by guiding, influencing, distorting the context. The space is in the dark, only the instrumentalist is visible, dimly lit: a duet is thus created between the guitar and the place. It is the place, the space that is given to listen.

esigned to be performed in heritage spaces: churches and cloisters, museums, galleries ... Depending on the context, the public may walk around.

"No one will dispute the primordial importance of dissemination in music & acousmatic works ... Likewise, the importance of spatialization in "Urban" music.

So the importance of "corrections", equalizations, frequency filters and other delay lines in the simple broadcasting of concerts in large halls ... But, the technical hacking then the noisy excess then "noise" or even "Trash noise" ... reveal the possible use of the mixer as a source. Then through the technique of multiple injections, we see the mixing as a tool of own creation. However, that evening, at the "Instants Chavirés", Fred Galiay, as a composer, created, from a prepared material and with the guitar of Jean-Sébastien Mariage, an instantaneous composition of a new kind ...

Mix serious resonances from synthesis blocks on guitar chords, even simple strings ... With a relatively simple device: A two-way pedal, in instrument output sending on two other pedals managing the loops and the effects. Go back to the mix + source to two baffles in principle non-directional (ceiling oriented) generating sound relief effects ...

What is innovative about this device lies neither in the exchange of the two performers nor in the score; but the "secret" of this instantaneous composition lies in the exploitation of the resonances between the two sources and their spatial distribution. In fact, the deep originality of this device lies in the umbilical association between the resonant exploitation of the material simultaneously with its spatialization. It’s like the feed back becomes feed forth! ...

The score notes precisely the time, the blocks and the material to be looped with their assignments and intensities; during mixing, by adjusting the balance of the recorded material and the instrument, as well as by filtering, we can "work" the material in such a way as to sculpt it, to shape it dynamically, to spatialize it ...

This also influences subjectively in return the hold of the instrument, the length of the loops, the speed of the sequences ... Of course, this also implies a very great bond between the actors, and a very shared sensitivity.

But these two long-time traveling companions know how to do it better than anyone! ! The rigor and the subtle variety of the proposed sounds / sequences as well as the spatialization of this work undoubtedly herald future performances and certainly new compositions by Fred Galiay in a role, that of spatializer, which is not necessarily the extension of the guitar ...

Another very beautiful and innovative evening at Les Instants… "