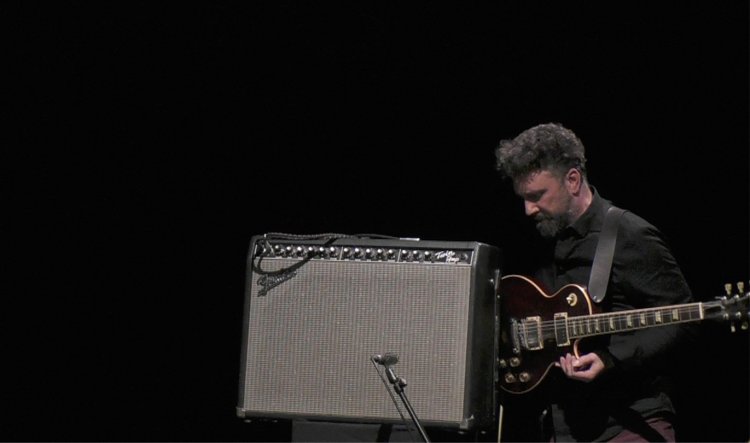 The bowstring, like that of the lyre, exerts a pull on the wood, which itself receives each string and tightens it. It is this double pull in both directions that enables the beauty of sound when the beauty of sound says nothing other than the precision of death from the arrow that shoots towards the prey.

Its name is a play on words with "any state of the body". It’s a guitar solo, it’s not a dance, but the sound is generated by the movements of the musician, approaching and moving away from the guitar amplifiers. It’s a feedback game.

Feedback. Sounds are launched from the amplifier to the guitar, where they bounce back to their source. The strings of the guitar weave a web which reveals a sound horizon whose reliefs are drawn by the fluctuations of the electric matter. Far from control or mastery, the musician here brings into play a most simplistic device that he pushes to the extreme, wandering around the amplifier, like a dance that destabilizes the waves.

This project was performed for the first time at the Pépète Lumière festival (France) at the end of May 2021. It will be played next March at the invitation of Jazz à Poitiers (France) after a conference called "Cosmologie of noise".