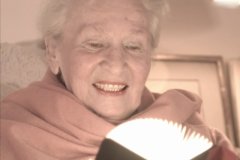 This concert evening revolves around one of Éliane Radigue’s most magnificent pieces in her third work period of purely instrumental compositions known as the “Occam” cycle. It is tempting to think of “Occam Océan” as the “summum opus” of her late work, given its large instrumentation, were it not for Radigue’s philosophy to defy such categorisation.

Until the early 2000s, Radigue’s deeply meditative electronic compositions sprang mainly from her work with the ARP 2500 Synthesizer. When she left behind the world of electronic music, she started to develop a remarkable collaborative way of working with a wide range of instrumentalists or “musician-accomplices”, as François Bonnet writes, “bringing an additional relational dimension to a music which until then had been constructed solitarily”. Thus “Occam Océan” was created for and with the musicians of the Paris-based ensemble ONCEIM – her first piece for orchestra – using solely oral and aural transmission. Radigue’s sonic imagination lives embodied in the musicians of the ensemble.

Radigue’s instrumental work is not only outstanding due to her musical qualities, and her ability to create a listening experience both accessible and shared between musicians and audiences. It is also inimitable in its very practice of holding, growing and transmitting the knowledge of composition collectively, in an interpersonal space, without the authoritative gesture of scripture.